Outline of the Problem

All school students in Japan must study English at some point, and since April 2011, English instruction has become compulsory from Grade 5 of elementary schools (age 10). And yet, the results of English teaching in Japan remain patchy, while English’s popularity as a school subject is also very questionable. In one university study, only 1/3 of children surveyed said they “liked” English (31.1%), while 2/3 said they “disliked” it (68.7%).*

Traditionally, the grammar-translation method has been favored in Japanese schools. This on its own does not necessarily preclude Japanese school students from becoming proficient in English; rather, the problem stems from a lack of reinforcement and inadequate practice. This is especially true since study in school is often geared towards helping students pass exams such as the high-school and university entrance exams and popular English qualifications such as TOEIC and TOEFL, so-called “teaching to the tests”.

Therefore, Japanese students often absorb a considerable amount of vocabulary and grammatical knowledge, but do not get to consolidate what they’ve learned by putting it into practice using real-world materials. While some more enterprising teachers do incorporate mobile phones and pop culture into their lessons, in most cases, English instruction relies heavily on government-sanctioned textbooks. Since the aim of English instruction is to pass tests, there is often no reading program, few opportunities for conversation or presentation, and no schedule for watching movies etc., and engaging with real-world materials showing the variety of ways in which words and phrases studied are actually used. 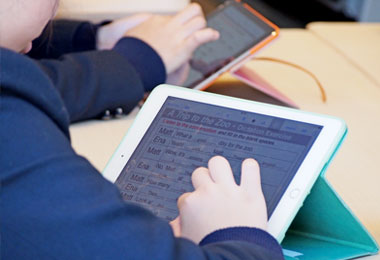 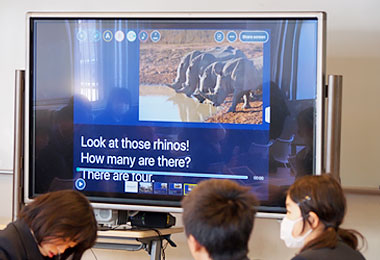 Since students are commonly deprived of chances to practice speaking English or interact with a native speaker, when the opportunity does arise they are often shy, tongue-tied or extremely anxious, and fail to demonstrate the full range of their abilities. Thus, one of the teacher’s key roles is to develop strategies and techniques to help students manage and overcome their shyness or anxiety and unlock their English potential. Matthew has been using LNS to do just this.

Matthew starts with the traditional grammar explanation, but spices it up by showing a short pre-recorded video of a dialogue using the new grammar. He then pushes an incomplete script of the dialogue to the students via the app’s “Tunnels”* function and asks them to fill in the gaps. Students listen to the dialogue again by themselves and fill in the gaps as best they can. They then check the answers as a whole class, with Matthew picking a different student to read each sentence aloud, after which he sends the complete version of the script to students via “Tunnels”. 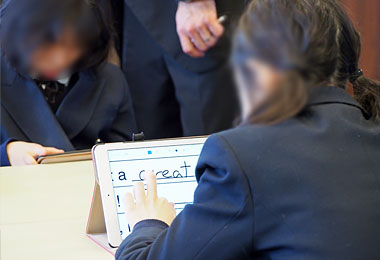 For the next activity, students work in pairs and create their own dialogue incorporating the new grammar points based on Matthew’s sample script. Each student writes their half of the dialogue, using a new Card for each sentence of their dialogue and adding audio of themselves reading it aloud as well as text. Once finished, students exchange their half of the scripts via Tunnels and connect the Cards in order so that they both have a completed version of their dialogue. They then choose a “leader” who takes responsibility for submitting a copy of the completed dialogue to Matthew.

Matthew reads and listens to the pairs’ self-created dialogues and marks them, correcting the spelling and grammar of the written script and adding comments and tips about the pronunciation, intonation etc. of the audio recording. Finally, he returns the marked work along with his personalized feedback to the pairs of students.

*The tunnelling feature enables sharing contents and data between users via wifi in real time.

As mentioned above, English is disliked or seen as difficult by a majority of Japanese school students, so it is vital for teachers like Matthew to search for ways to engage and motivate students with fun and accessible tasks. Matthew succeeds in taking the traditional grammar-translation method and gives it a fun, modern twist, making it not only more enjoyable, but also more effective.

Matthew’s method is active and interactive rather than passive. It gives students an opportunity to reinforce their understanding of the new grammar by using it themselves in a simulation of a real-life scenario. It also gives them the chance to produce both verbal and written output and thus simultaneously improve both writing and speaking skills. 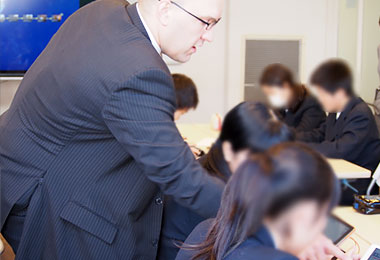 In addition, many students have acquired bad habits or unresolved problems with pronunciation, such as difficulty in distinguishing between “l” and “r” sounds; however, due to time constraints and staffing limitations it’s impossible to give each student tailor-made guidance and correction during teaching hours. However, with each student’s voice recording stored in the Cloud via LNS, it’s possible for teachers to provide tailor-made feedback to individual students as well as giving students a listening library to revise and practice from at home.