Make an Original Emblem using the Beauty of Symmetry

LoiLoNote School's ease of use raises students motivation, and makes possible lessons where students can explore the beauty and joy of mathematics.

First, we talked about mathematics hidden all around us and looked at pictures from the natural world that display the beauty of mathematics.
Next, we used traditional Japanese family crests to introduce the concept of symmetry, and practiced categorizing the crests based on the kinds of symmetry they display. We categorized the crests into four groups: the red group for those with 1 axis of symmetry, the blue group for those with 2 axes, the yellow group for those with 3 axes, and the green group for those that have no axis of symmetry, but use rotation to repeat a pattern. We had fun competing as a class to guess to which group each insignia shown belonged.
Then we looked for similarities between the emblems for the 2020 Tokyo Olympic and Paralympic Games. Students enjoyed discovering all the hidden curiosities in the two emblems. Not only are both of the emblems made from the same set of 45 rectangles and squares, the same shapes have the same orientations in each emblem. To further explore the hidden patterns of the emblems, students were asked to use the same set of 45 shapes to create their own symmetrical emblems.
Finally, students shared their emblems with others in the class, assessing the qualities and kinds of symmetry they displayed. 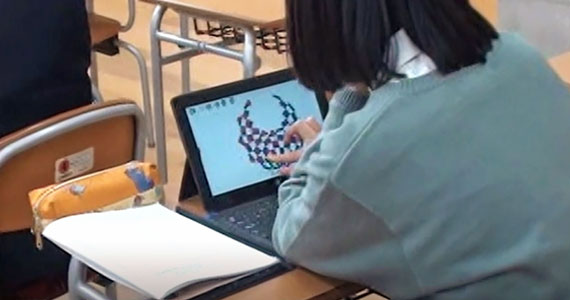 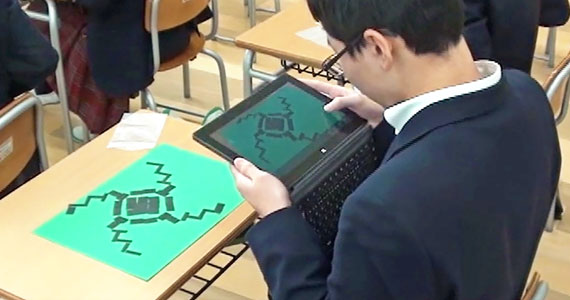 The Benefits of Using LoiLoNote School in this Unit

Objectives of the Unit

Six Scenes from the Unit

1. Discover the beauty of the hidden mathematics all around us

First, the teacher explained how many mathematical patterns are hidden all around us. So many items gain their beauty from the regular repetition of these patterns. Students looked at images of familiar items and could see the mathematical beauty of the natural world. 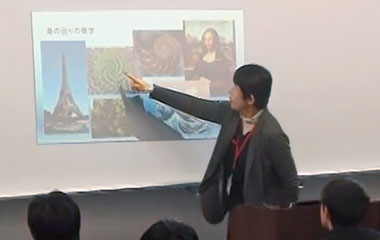 2. Categorize family crests based on their symmetry

Next, students considered the symmetry of family crests. They found commonalities to categorize crests.

We divided items into these four groups.After that, I showed some family crests and we enjoyed competing as a class to guess which group the show item belongs to. 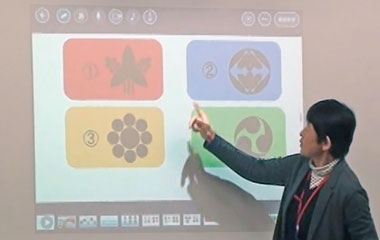 3. Find properties of and commonalities between emblems for the Tokyo 2020 Olympic and Paralympic Games

Students thought about the similarities of the checkered patterns in the Olympic and Paralympic emblems.

【Common Points】
① Both are made up of the same set of 45 shapes: 2 sets of 18 rectangles of the same ratios and 9 squares.
② The sizes of the outer and inner circles are the same for both emblems.
③ The same shapes have the same angle of rotation in each emblem.
After that we confirmed that each emblem can be created from the parts of the other by shifting each piece without altering its angle of orientation. We also found many other interesting qualities hidden in the two emblems. 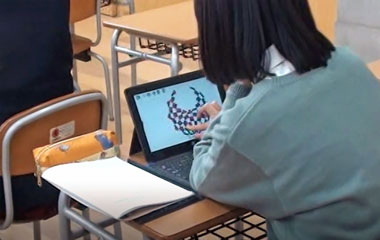 4. Create an original emblem using the same parts as the Tokyo Olympic emblems 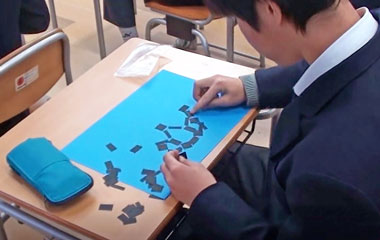 Students took pictures of their emblems and sent the image to the teacher via LoiLoNote School. All submitted works were projected onto the whiteboard at once in the order of submission. The colors of the construction paper we used were quite vivid, so we all enjoyed simply looking at the creations on the board. 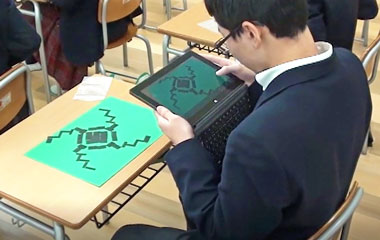 Students looked at the emblems their friends created and noticed the characteristics and symmetry they showed. Students made noises of surprise when their friends showed them ideas very different from their own. After seeing their friends' creates, students were eager to try making an emblem from a different symmetry group. Maybe we can do that at a future time, this day's time had run out. 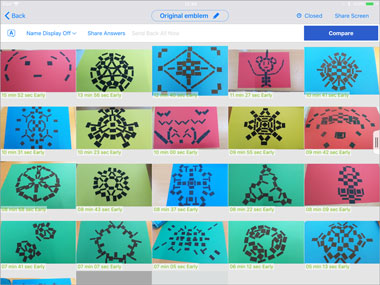 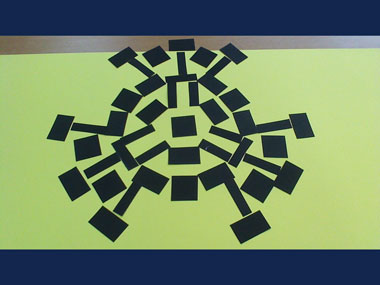